Days of Re-Creation: A Virtual Play

“What streaming theater should be.” – Broad Street Review    Read the review HERE.

The Days of Re-Creation is a virtual play written entirely by writers of color.

We are living in a time of incredible upheaval. Our daily lives are unrecognizable from a year ago. As a country we are undergoing a deep reexamination of the institutions that surround us. Each day it feels like we are recreating ourselves and seeking to rebuild in new and better ways.

2020 will be seen as a pivotal year in the history of mankind. While it has been full of fear, exhaustion, conflict, and death, it also has the potential to be a year of revolution, rebirth, and re-creation.

The Days of Re-Creation: A Virtual Play is seven 10-minute plays on this theme of re-creation which relate in some way to one of the 7 days of creation from the Book of Genesis.

Light and dark… by BD Wong (The Three Karens)
Sky and water… by Masi Asare (The Strong Friend, and Company)
Land and plants… by SEVAN (Soilmates)
Planets and stars… by Nandita Shenoy (To the Stars With Love)
Fish and birds … by Lauren Yee (The Nerd)
Land animals and humans…by AriDy Nox (S.C.R.I.)
Rest… by Erlina Ortiz (La Egoista)

Masi Asare (she/her) – Masi is a composer, lyricist, and playwright. Shows include: The Family Resemblance (book/music/lyrics; developed at Live and In Color/ Bingham Camp and Eugene O’Neill Center); the new musical adaptation of Mira Nair’s film Monsoon Wedding (lyrics), to open at Leeds Playhouse and London’s The Roundhouse in summer 2021; spy musical Sympathy Jones (music/lyrics/concept; NYMF; Playscripts); and a one-act play about teen super hero Ms. Marvel, Mirror of Most Value (Marvel/Samuel French). Commissions: Theatre Royal Stratford East, Barbara Whitman/Grove Entertainment, Victory Gardens/ Toulmin Foundation. A past Dramatists Guild Fellow, Masi won the Billie Burke Ziegfeld Award for a woman composer of musicals, awards for composition and lyrics from the O’Neill, a Theater Hall of Fame Emerging Artist Grant, and the Stacey Mindich “Go Write A Musical” Lilly Award. An advisory board member for MAESTRA, she holds degrees from Harvard and NYU Tisch and is on the Theatre department faculty at Northwestern University.

AriDy Nox (she/they) – is a multi-disciplinary black femme storyteller and social activist with a variety of forward-thinking creative works under her/their belt including the sci-fi operetta Project Tiresias (2018), the ancestral reckoning play A Walless Church (2019), the afrofuturist ecopocalypse musical Metropolis (2019), and many others. AriDy creates out of the vehement belief that creating a future in which marginalized peoples are free requires a radical imagination. Their tales are offerings intended to function as small parts of an ancient, expansive, awe-inspiring tradition of world-shaping, created by and for black femmes. As a graduate of the Graduate Musical Theatre Writing Program at Tisch School of the Performing Arts at NYU and a beneficiary of the Emerging Writer’s Group at the Public Theatre, she has been inordinately privileged to share the workings of her imagination among a vast array of inspiring and supportive artists of various radical backgrounds throughout the city.

Erlina Ortiz (she, her) – Erlina Ortiz is a Dominican-American playwright, performer, and theatre maker from Reading, PA-based in Philadelphia. Her heartfelt and timely plays on gentrification, domestic violence, and cultural preservation have been produced with Power Street Theatre where she is proud to be Co-Artistic Director and Resident Playwright. In 2018, Her play Las Mujeres received The Bonaly Award for
Creation of Community Joy and in Spring 2019 her play Morir Sonyando was nominated for six Barrymore Awards including Outstanding New Play. Erlina has received the Amtrak Writer’s residency, the Signal Fire Outpost Residency, in 2019 she gave the Keynote Address at the Delaware Writer’s Conference, and she is a 2020 recipient of the Leeway Art and Change Grant. Erlina has taught playwriting with the University of the Arts, Power Street Theatre, and Blue Stoop phl. Erlina believes being an artist is a superpower, she believes in using her powers for good.

Nandita Shenoy (she/her) – Nandita is a New York-based writer-actor. Her Rage Play, was recently named to the Kilroys List 2020. Washer/ Dryer was produced multiple times nationally after its world premiere at LA’s East West Players and an Off-Broadway production in which she also starred. Her first full-length, Lyme Park: An Austonian Romance of an Indian Nature, was produced by theHegira in Washington, DC. Her one-acts have been produced in New York City and regionally. Nandita won the 2014 Father Hamblin Award in Playwriting and a 2018 Mellon Creative Research Fellowship at the University of Washington School of Drama in partnership with Ma- Yi Theater Company. She is a proud member of the Ma-Yi Writers Lab, the Dorset Theatre Festival’s Women Artists Working Group, and the Dramatists Guild. Nandita holds a BA in English literature from Yale University. www.nanditashenoy.com

BD (he/him) won a Tony Award for his performance as Song Liling in M. Butterfly, becoming the only actor in Broadway history to receive the Tony Award, Drama Desk Award, Outer Critics Circle Award, Clarence Derwent Award, and Theatre World Award for the same role. He was nominated for a Critic’s Choice Television Award for his role as Whiterose in Mr. Robot, also earning an Emmy nomination for Outstanding Guest Actor in a Drama Series. Live & In Color was founded by Director-Choreographer Devanand Janki in 2015 to develop new work for the stage that promotes and celebrates diversity. Emphasizing non-traditional casting, multi-ethnic participants, and bold theatricality, L&IC offers unique development opportunities for new plays and musicals that encourage dialogue among artists from a variety of cultures. We envision an American Theatre where established and aspiring artists of color have generous opportunities to practice their craft, on- and offstage.  Shows developed at Live & In Color include Call It Courage by Adam Overett, The Family Resemblance by Masi Asare, Pangaea by Janet Noh and Lee Summers, Present Perfect by Jaime Lozano and Nancy Nachama Cheser, Little Girl Blue: The Nina Simone Musical by Laiona Michelle, Narrow Daylight by SEVAN and The Golden Threshold by Cheeyang Ng and Eric Sorrels.  www.theatreincolor.org

MEET THE CAST OF The Days… Ang Bey (they/them) is a Black, queer storyteller from Southwest Philadelphia. They are the co-artistic director of Shoe Box Theatre Collective and the co-creative director of Wings of Paper Theatre Company. 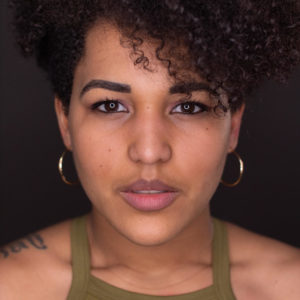 Dolores Avery (Jess, Bee, Betsaida)  Is a proud Afro LATINX actress who graduated from Syracuse University with her BFA. Dolores also finished two years at Maggie Flanigan Studio this past June. She is so incredibly excited to be Joining PTC on this amazing project. NYC Theater credits include Good Friday (The Flea), Ms Estrada (Q Brothers), Orphans and Outsiders (John Cullum Theater). You can follow her on IG: @queen_davery  #BLM She/Her/Hers Kimberly S. Fairbanks is an actor and voice over artist who can be seen and heard across the performance mediums. Credits include: International: I Will Speak for Myself (Edinburgh Festival Fringe), Off-Broadway: I Will Speak for Myself (59E59 Theater), The Mecca Tales (Sheen Center), Regional: Dance Nation (The Wilma Theater), Sweat (Philadelphia Theatre Company); Sanctions (World Premiere/Delaware Theatre Company), I Will Speak for Myself (Eugene O’Neill Foundation), Sing the Body Electric (Theatre Exile), Human Rites (InterAct Theatre), Passing Strange (The Wilma Theater). Film/Television: Glass, The Upside, FBI: Most Wanted, Instinct, Madam Secretary, The Looming Tower, Delco Proper, House of Cards, and The Family. Kimberly is a National Partners American Theatre Classical Acting Award Recipient. MA in Acting from Villanova University. Suli Holum is a Philadelphia-based theatre artist who has appeared at Philadelphia Theatre Company, People’s Light, Arden, Theatre Horizon, Lantern, Theatre Exile, and the Wilma where she is a member of the HotHouse Company.  She was a founding member of Pig Iron Theatre Company, Co-Artistic Director of Stein|Holum Projects, and recently founded Suli Holum/The Work, an incubator for new performance.  She is the recipient of a Barrymore Award and Drama Desk Award, an Independence Fellowship, and a TCG Fox Fellowship. Upcoming: HBO’s Mare of Easttown. Christine Toy Johnson is an award-winning writer, actor, director and advocate for inclusion. As an actor, Christine has appeared on Broadway (The Music Man, Grease!, Chu Chem), Off-Broadway (Merrily We Roll Along, Pacific Overtures, Crane Story, Falsettoland, Balancing Act, Philip Goes Forth, NYSF), in regional theaters across the country (including the Guthrie, Williamstown and the Huntington) and nearly 100 television and film appearances (including recurring guest star roles on Marvel’s “Iron Fist,” “The Americans,” “You,” “Law and Order: SVU”) and more.  She is on “extended intermission” from the North American tour of Come From Away. Her written works have been produced and/or developed by the Roundabout, Village Theatre, Barrow Group, Prospect Theatre, Weston Playhouse, O’Neill, Women’s Theatre Festival, CAP 21 and more and are included in the Library of Congress’s Asian Pacific American Performing Arts Collection (Playwrights Division). She serves on the Council of the Dramatists Guild and is host of the Guild’s podcast “Talkback” on Broadway Podcast Network. Rosetta LeNoire, JACL, Asian American Arts Alliance, Obie awards for advocacy in diversity and inclusion. For details, please visit www.christinetoyjohnson.com Twitter/Insta: @CToyJ Iraisa Ann Reilly is a Jersey-born, New York-based theatre artist with artistic roots in Philadelphia. As an actor she has worked with Cape May Stage, Teatro Del Sol, Powerstreet Theatre Co., and South Camden Theatre Co. to name a few. As a writer, some of Iraisa Ann’s plays include Good Cuban Girls (Teatro del Sol, at The Arden Theatre), One Day Old (Philadelphia Fringe), Ocean Beach, and Medallas Por Un Abrazo. She performed her original work, A Beginner’s Guide to Interpreting Aphasia, for Philadelphia’s Solow Fest, 2019. Iraisa Ann was a semifinalist for the Page 73 grant in 2019, and has trained with LAByrinth Theatre’s Summer Intensive and the Maria Irene Fornes Workshop (with Migdalia Cruz). She is currently pursuing an MFA in Dramatic Writing from New York University and holds a BA in Theatre and English from the University of Notre Dame. Thanks to the playwrights for their beautiful work, and to PTC/ Live & In Color for this opportunity. Love and Thanks  to mi familia. iraisaannreilly.com.(she/her)

Jamel Baker is a freelance stage manager and is thrilled to join Philadelphia Theatre Company for the first time. Jamel has worked with many companies throughout the city: Simpatico, Tribe of Fools (also a company member), Arden, EgoPo, Azuka, Enchantment and more. Jamel holds a BFA from Millersville University.

We with to express our gratitude to the Performers’ Unions: Actors’ Equity Association, American Guild of Musical Artists, American Guild of Variety Artists, and SAG-AFTRA, through Theatre Authority, INC for their cooperation in permitting the Artists to appear on this program.