The EAST COAST PREMIERE of a new play by LUCAS HNATH!

In this humorous political fantasy, Hnath imagines an alternate universe, very much like our own, where a woman named Hillary is trying to become president of a country called the United States of America. In a hotel room in New Hampshire, we meet Hillary who is poised to lose her last primary election in the year 2008.  With sly humor and astute psychological insight, Hnath’s play transcends what we know about the Clintons to become a story about gender, power,  marriage, and possibilities. Hillary and Clinton is not exactly about one of America’s most examined relationships but will make you think about your own.

“Go to the theatre! Hillary and Clinton couldn’t be better timed.” – The Philadelphia Inquirer

“Serious, yet funny. The production is first rate! This gives a juicy role to a terrific actress!” – DC Metro theatre Arts

“Hillary and Clinton is an audacious, whip-smart, highly entertaining piece of writing. You should go.” – Chicago Tribune

“Thought-provoking for current supporters of any (or no) candidate.” – Time Out Chicago

“An intriguing, timely portrait of life in the public eye.” – BroadwayWorld Chicago

“90 minutes of pure escapism.” – Around the Town Chicago

“Out-of-this-world funny. Allow[s] viewers to come up with their own opinions on what the truth could be.” – Windy City Times

As a reminder, Late Seating, including seat location, is always at the discretion of the House Manager. Late Seating for Hillary and Clinton will take place approximately 10-12 minutes into the show.  Late arrivals may watch the performance on the monitors located in the lobby or speak with the House Managers for a brief recap.

With the 2016 election season in full swing, we remind our donors, subscribers, and audience members that, as a 501(c)(3) tax-exempt entity, Philadelphia Theatre Company (PTC) is prohibited from participating or intervening in any political campaign in a manner that favors or opposes a candidate for any public office. Therefore, while PTC may produce plays with political themes or host forums for candidates running for public office, the theatre remains steadfastly non-partisan and welcomes all political views. 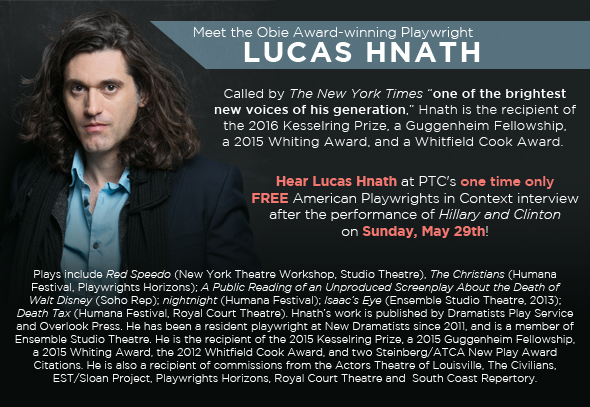 Thank You to Our Sponsors for a Great Show & Season!